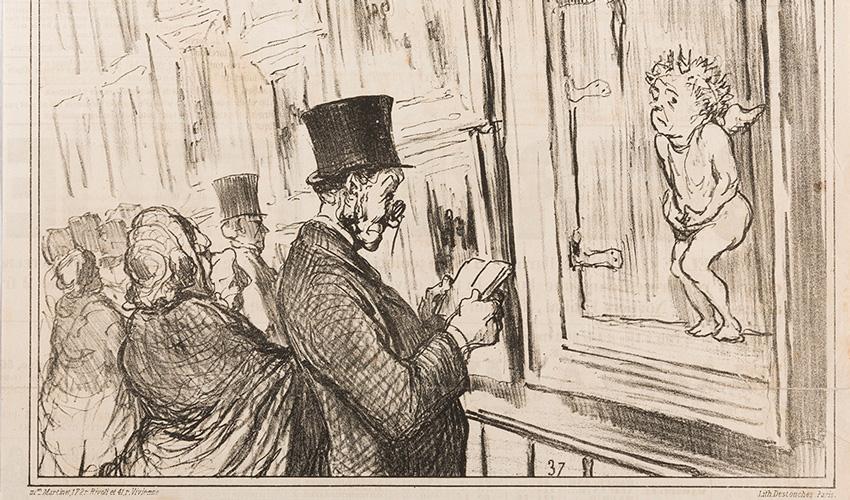 In the second half of the 19th century, Honoré Daumier (1808–1879) was employed by popular rags, such as La Caricature and Le Charivari to produce often hilarious lampoons of Parisian daily life. One of his favorite subjects was the art world in 19th-century France. Daumier was, after all, not only a chronicler of the Parisian art scene, but a participant as well. A prolific artist working in a variety of media — in addition to lithography, Daumier produced a vast number of paintings, drawings, and sculpture—Daumier was intimately familiar with the art, artists, and audience to whom he gravitated time and again in his caricatures.

This selection of lithographs from the permanent collection, curated by former SBMA exhibition intern Elizabeth Saari Browne, situates Daumier’s observations of the art world within the context of the annual Salons, the exhibitions in which art and its producers, consumers, and critics were brought together. Spanning almost 25 years of his career, these lithographs not only showcase Daumier’s attitudes toward the exhibition, valuation, and commercialization of art, but also reveal his knowledge of contemporary art practice and the history of art through the artist’s habitually trenchant puns and witty references, which are illuminated in detail in the exhibition didactics. Through the recent gift of more than 1,500 Daumier lithographs by long-time supporter, Robert M. Light, SBMA is now one of the richest repositories of the work of this celebrated master of 19th-century caricature on the West Coast.