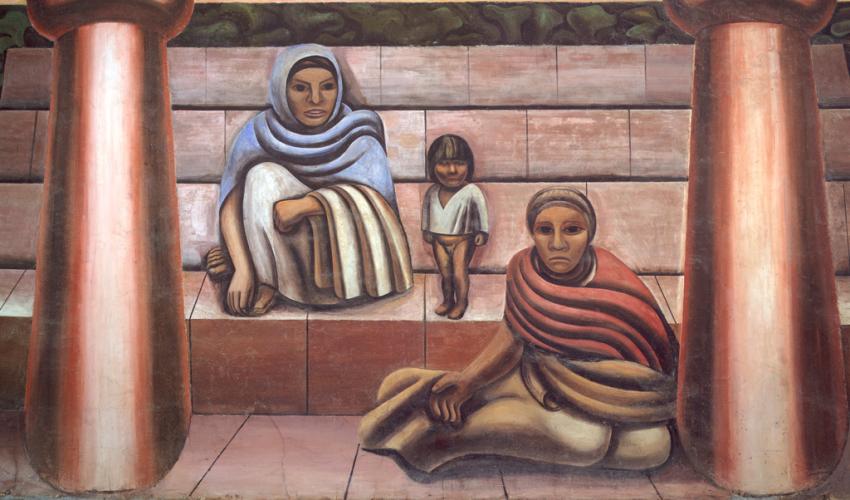 Portrait of Mexico Today is one of three murals painted by David Alfaro Siqueiros as a political exile in Los Angeles in 1932. He first created Workers’ Meeting at the Chouinard Art Institute, where he briefly taught fresco painting, and then América Tropical at the Plaza Art Center on Olvera Street. These murals were subsequently whitewashed for what was perceived as their radical, anti-capitalist subject matter. However, since Portrait of Mexico Today was created for a private residence, it was spared from public criticism and destruction. The mural was originally painted on the interior walls of a covered garden patio at the Pacific Palisades home of filmmaker Dudley Murphy. Siqueiros offered to paint the mural as a gesture of gratitude to Murphy, who housed the artist while in Los Angeles and helped generate sales of his easel paintings. The mural remained there until 2001, when it was generously donated to the Santa Barbara Museum of Art. To preserve the integrity of the work and ensure its future protection, the entire 25-ton structure that housed the mural was carefully transported intact to Santa Barbara. Portrait of Mexico Today is now located on the front terrace of the Santa Barbara Museum of Art and has become an important work of public art in the city of Santa Barbara.

Illustrating the revolutionary political convictions that led to Siqueiros’s exile, Portrait of Mexico Today tells an impassioned, international story of social oppression and political corruption. The central wall features two indigenous women and a child on a stepped platform reminiscent of a pre-Columbian pyramid. To their left is a Mexican revolutionary soldier whose mask has slipped to reveal the face of Plutarco Elías Calles, a military hero and former President of Mexico (1924-1928). The bags of money at his feet and his unmasked face expose him as a traitor to the people’s cause, corrupted by greed. On the narrow wall opposite Calles is a portrait of financier J.P. Morgan—a symbol of U.S. economic power. The close proximity of the images of Morgan and Calles reveals Siqueiros’s interest in Mexico-U.S. relations, which at the time was centered largely on the oil industry. On the wall between them, the artist placed two martyred workers, implicating Morgan and Calles in their bloodshed. On the right wall, a soldier dressed in a Soviet uniform kneels with his rifle drawn, linking the Mexican Revolution with the Russian Revolution.

Funds for the conservation and transportation of this mural from Los Angeles to Santa Barbara were generously provided by two anonymous donors.