For 16 years, the Museum’s Art in Motion (AIM) program has served at-risk and low-income youth in Santa Barbara County, providing a joyful means of making connections between themselves and the world around them through art. During the summer months, SBMA Senior Teaching Artist Tina Villadolid provided free art lessons to pre-kindergarten students at Storyteller Children’s Center (SCC), 5–11 year olds at the United Boys & Girls Club, Goleta Unit, and families attending the Foodbank of Santa Barbara County’s Picnic in the Park sites. The SCC preschoolers and the United Boys & Girls Club students were bused to the Museum for interactive tours of Puja and Piety: Hindu, Jain, and Buddhist Art from the Indian Subcontinent. Family participation was encouraged through family nights, program finale student art shows, and the distribution of multiple-visit free admission passes. 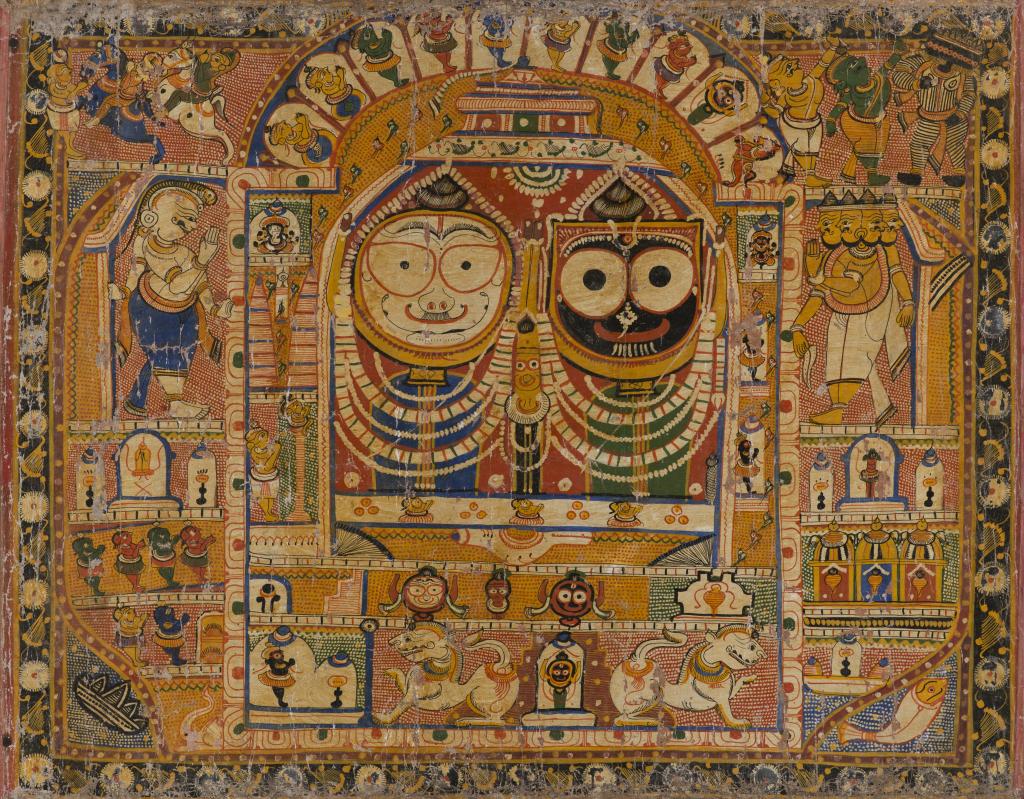 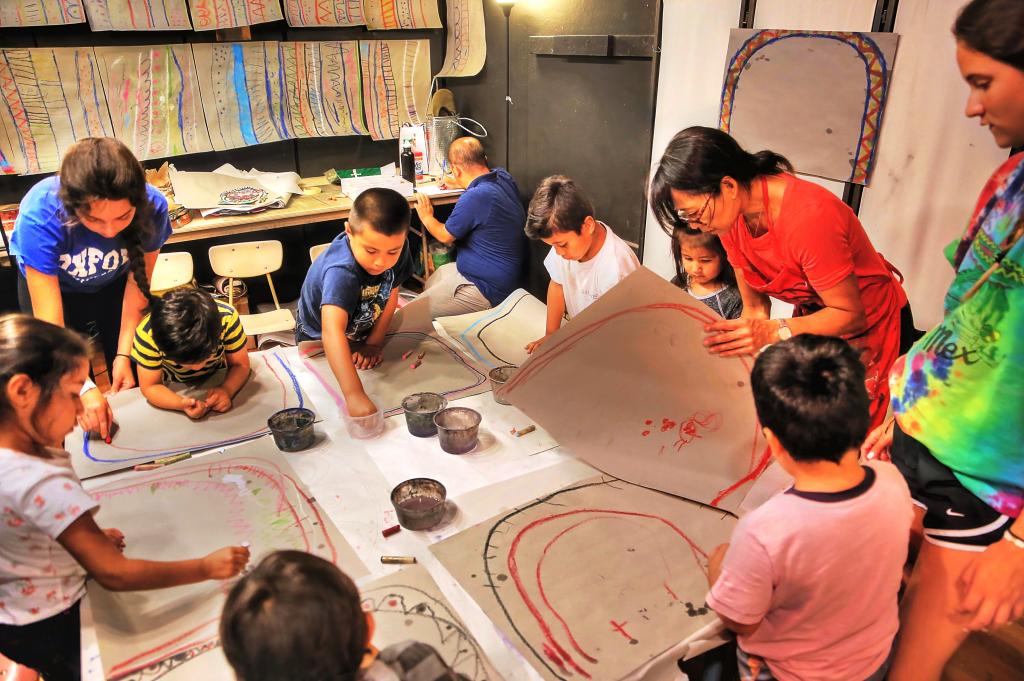 Puja and Piety was an ideal exhibition for introducing visual storytelling to the pre-kindergarten students. The program opened with an onsite family night, where participants were introduced to some of the enchanting gods, goddess, and myths featured in the works on view in the galleries. Family members then worked side by side, using a printmaking technique to collaboratively recreate the Jain painting Fourteen Auspicious Dreams Seen by the Mother of a Jina upon His Conception (18th century). The following week, the young artists came to the Museum with their parents and siblings for a bilingual tour of the exhibition. Back in the classroom, the pre-kindergarteners studied Pata Painting for Pilgrims Depicting the Trinity of the Puri Temple (late 19th century) and decided the image was about a big party for the central figures. Students practiced creating patterns using shapes and lines, and sketching the large eyed, almost cartoon-like subjects. Using color pencils, markers, oil pastels, watercolors, and printmaking techniques, these young artists visually retold their own versions of the party of Puri Temple.

Storyteller Children’s Center is a nonprofit organization providing quality, tuition-free early childhood education for homeless and at-risk children, as well as comprehensive support services for their families since 1988. 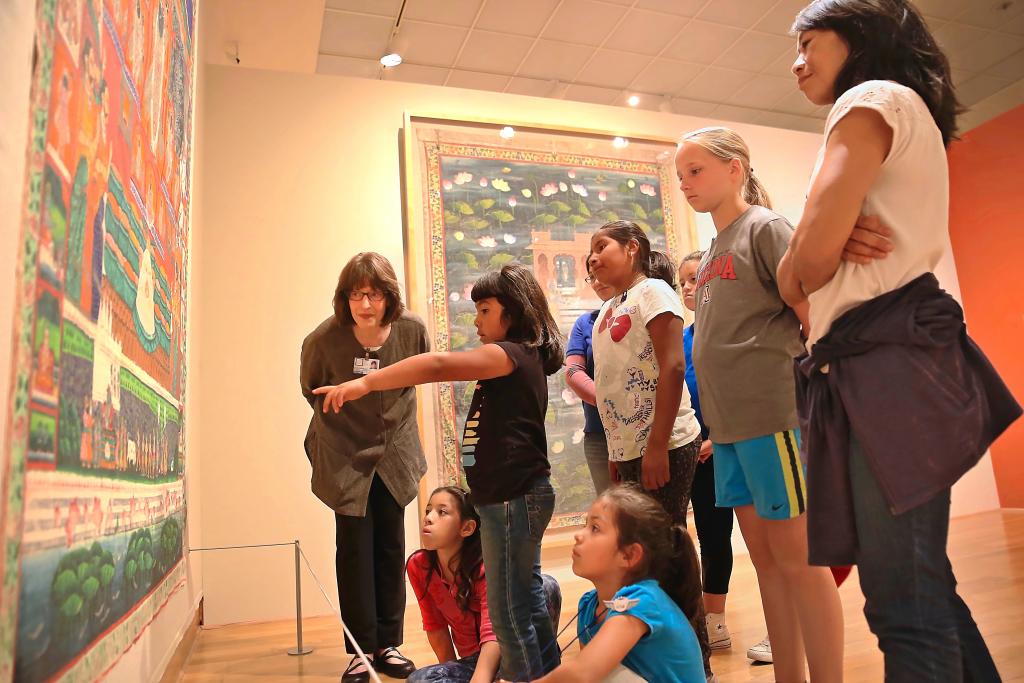 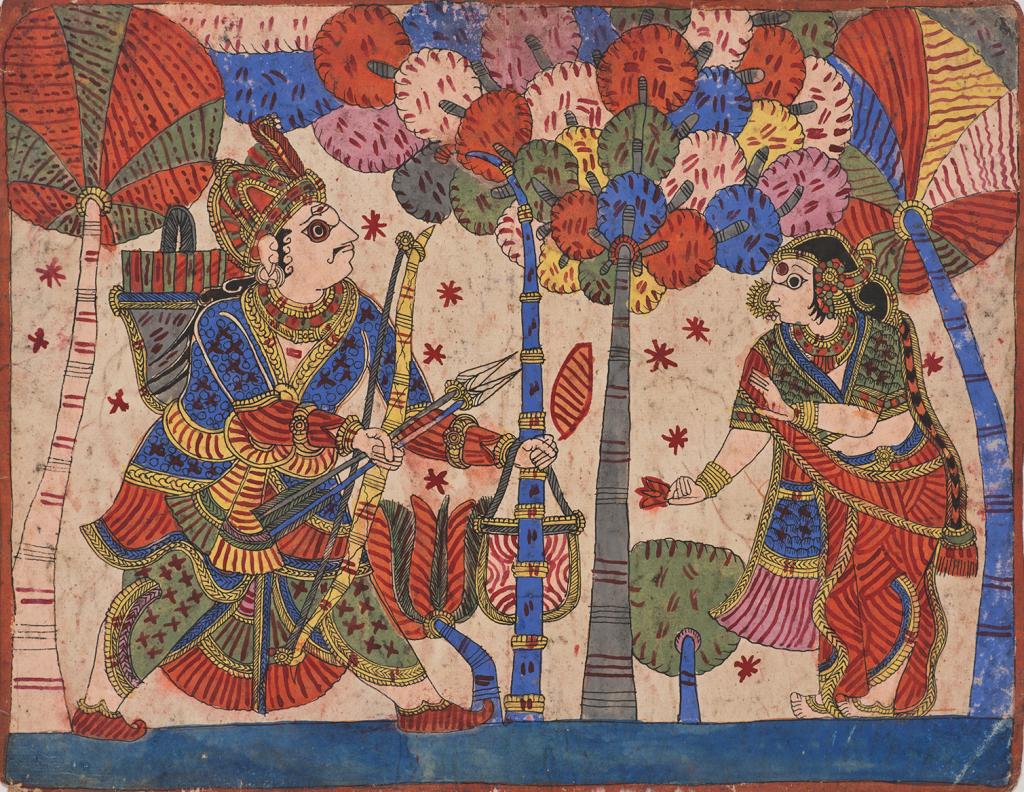 During their bi-weekly art classes, the 5–11-year-old students were inspired by Narrative Illustrations of Scenes from the Ramayana, a series of ink and color paintings on paper on view in the Puja and Piety exhibition. They were asked to reimagine the story by reordering the sequence of the individual paintings. The young artists carefully studied the reappearing characters―their costumes, expressions, gestures, and actions. The students then shared their interpretations of their re-told tales―image by image―and offered supporting arguments for the new order of each painting.

Next, each student drew their own three-part visual narrative, borrowing characters and settings from the Ramayana series. The details in their drawings reveal how closely the original works were thoughtfully studied by the students. Their compositions were inked in with black Sharpie pens, than painted with gouache after a class of color mixing and paintbrush skills. Each student presented both their paintings and corresponding story during the program finale family reception. The evening presentation was a perfect intersection of visual and verbal literacy―a delightful conversation between imaginative storytelling and skillful use of the elements of art.

The United Boys & Girls Club’s mission is to enable all young people, especially, those who need us most, to reach their full potential as productive, caring, and responsible citizens. 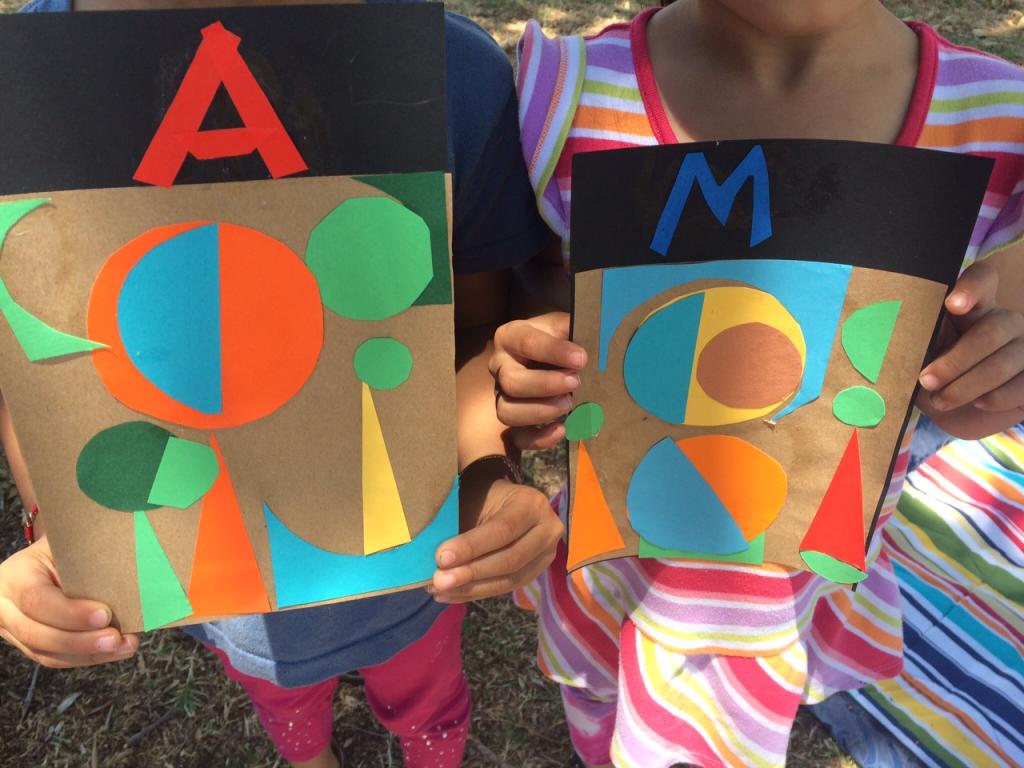 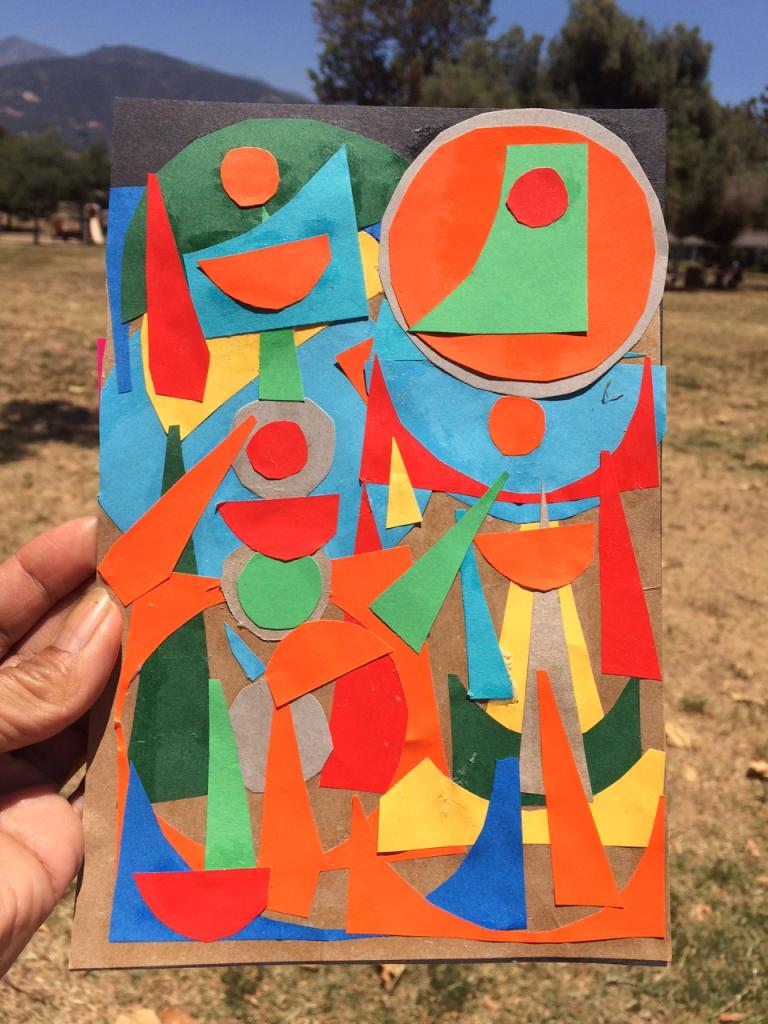 Three different sites in Santa Barbara’s south county were host not only to the Foodbank’s Picnic in the Park program, but also to free art activities provided by the Museum. Senior Teaching Artist Tina Villadolid visited Goleta, Santa Barbara, and Carpinteria for three consecutive weeks―each occurrence focused on a different work of art from the exhibition Highlights from Permanent Collection. Joaquín Torres-García’s Composition (1932), John Marin’s Cape Split, Maine, No.3 (1933), and Frederick Hammersley’s Growing game (1958) were catalysts for experimenting with collage, sgraffito, and color blending, while also learning about the use of symbols, landscapes layered with Navajo design, and abstract art.

At each site, blankets with plastic trays loaded with the art materials and images were set-up, luring the lunchtime crowd to the “art picnic” as readily as the actual food that was being served. Participants of all ages enjoyed the lunchtime art sessions. The outreach partnership with the Foodbank combined bodily sustenance with creative nourishment and an opportunity to learn more about SBMA.

During the summer months, many children in Santa Barbara don’t meet their daily nutritional requirements without free or reduced price school lunches. The Picnic in the Park program provides free nutritious meals, Monday through Friday, to all children in the county at designated parks, housing facilities, and neighborhood centers.