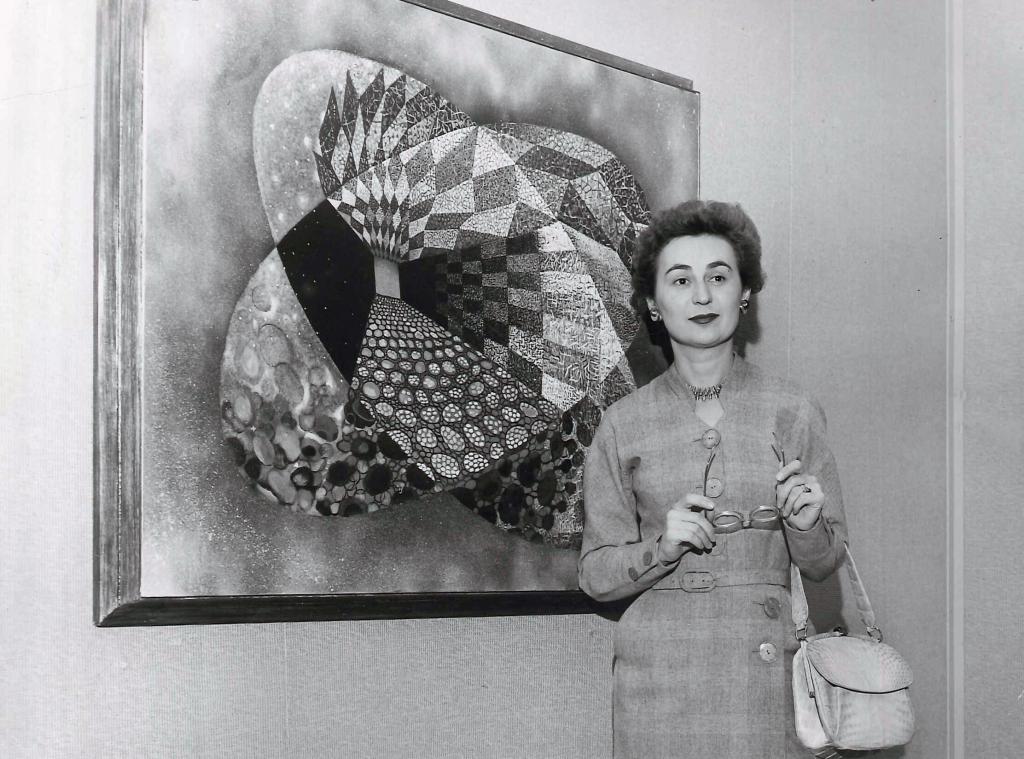 Born June Claire Kline on March 7, 1918  in Chicago, IL,  Wayne had aspirations of becoming an artist at an early age, and dropped out of high school to pursue that dream.  At just 17 years old, she had her first solo exhibition at the Boulevard Gallery in Chicago in 1935. A year later, she had another solo exhibition in Mexico City, at the Palacio de Bellas Artes.  In 1941 she married George Wayne, an Air Force surgeon, and although the couple divorced some years later she kept his name for the duration of her life.  In the mid-40s she moved to Los Angeles and became a certified Production Illustrator from the Cal Tech/Art Center School. This led to a brief position in which she helped the aircraft industry convert blueprints to drawings―a training that influenced some of her most signature optical art pieces, namely the Kafka series.

In 1960 she formed the Tamarind Lithography Workshop, a non-profit organization devoted to the stimulation and preservation of the art of the lithograph. In helping revitalize this art she collaborated with a number of renowned artists including Richard Diebenkorn, Sam Francis, Rufino Tamayo, and Louise Nevelson. Wayne’s work has been exhibited all over the world and is represented in several museum collections, including the National Museum of Women in the Arts, the Norton Simon Museum, the Museum of Modern Art, the Los Angeles County Museum of Art, and the Santa Barbara Museum of Art. SBMA was the first museum to hold a solo exhibition of Wayne’s work in the exhibition, “Color Compositions by June Wayne” in March 1950 (photograph above was taken at the 1953 exhibition, “Paintings and Lithography by June Wayne”).  Wayne passed away on August 23, 2011.

In honor of June Wayne, and Women's History Month, SBMA asked Ariane Claire (Wayne's Granddaughter) to write about her "June", giving us insight into the woman behind the work. The following is from Ms. Claire on June Wayne:

My name is Ariane Junah Claire, and I am June Wayne's granddaughter. I was born and raised in Los Angeles, CA, but moved away many years ago. In August 2011 I returned to Los Angeles for what was to be my 20-year High School Reunion. I had plans to stay a little longer and visit with family and friends. I would stay at June's home in Hollywood - her Tamarind Avenue Studios. The property that she had inhabited since 1965. The foundation of what has now become The Tamarind Institute - what had once been The Tamarind Lithography Workshop. The place where so many artists learned the Art of Lithography. The home where she created so many works of Art.  Little did I know, at the time, it would be my final visit.

She had been battling cancer for a few years.  As a planned five day visit was extended, I spent many hours by her bedside watching her slowly transition to another plane. And we had many conversations. Some long. Some brief. All memorable.One evening during this visit, as I sat upstairs with her, she was stroking my face with her soft hands (she had the softest hands you could ever imagine) and was saying to me “You’re my blood. You’re my granddaughter. And I love you and am so proud of you.”

I started to cry as she said those words and she got upset and stated that I shouldn’t be sad at the things that were happening as this is the circle of life. I pulled myself together and promised that the tears would come later and I would hold on to the good thoughts for now.As she started to drift off to sleep, her eyes suddenly opened and she said “Do you have your keys?”

And so I will tell you about some of these keys and my friend, June Claire Wayne.

She was always June. Never Grandma. Or Grandmother. Or any derivation of that "name." When I asked her, as a child, why all my friends called their grandmothers by such a title and why I just called her by her name she laughed a little and said she always admired my inquisitive mind. “It is very important to ask questions to get the answers you need!” she said. (There is a great distinction, she always imparted upon me, between ‘need’ and ‘want.’ I found it very telling that she distinguished between “answers I need” and not “answers I want.”)She said that society put a lot of restrictions on that title and allowed one to lose their identity when given such a responsibility. She wanted me to see her as a person and not be a mere role in my life. And more importantly, she wanted to be my friend and not just my grandmother. And so June she was – my friend.

When I was eight years, old June took me to Paris for a two week trip. I have every moment of that stay etched in my mind. Every second is documented in my memory. It was my first airplane ride. It was my first time traveling overseas. It was my first extended period away from my mother. As soon as we arrived at our flat in the Sixth Arrondissement, I promptly flung myself onto the bed and erupted into a flurry of tears and heaving sighs punctuated only by the gasps of “I miss my mommy!”

She sat on the bed and rubbed my back. She said, “We will call your mother and then you will calm down. Come on now, Ariane!  There will be too many times in your life that you can’t control the things that are happening around you and THAT is a situation in which I can forgive you for shedding a tear. But for this? You must not sit and cry for things which you can actually control.”

She had many business matters to attend to and so I occupied my time by taking pictures of my little stuffed toy – a gray dog I had inexplicably named Paxton. I would set up elaborate still shots and photograph him with a small Kodak film camera. When the film was developed she would patiently sit with me and explain the nuances of staging a scene and teaching me how to create the “art” to train the direction of the eye to meet the subject. Small artistic lessons imparted on an unwilling eight year old mind that I still use to this day.

It was important to June that she not treat me like a child but rather an equal. Age was simply a number and experience was more important than the number of years one lived. And experience she did give me!

June was fiercely independent and so I like to say that I come by that trait genetically. She was born in 1918 and had her first solo art exhibition in Chicago in 1935 at age 17. She continued on her artistic path for the rest of her 93 years. Never wavering or skipping a step in the direction she felt she must travel. Even in a time when women were told that their place was in the home and their greatest contribution should be children and family, June continued as a working woman, a working mother – a working ARTIST. She made it abundantly clear at a very early age that I should not let the phrase “You can’t” be the guiding force in my life. She always said “Add ‘Now’ to the end of that phrase and then take the time to find out how to remove the ‘now’ and turn it into ‘You can!’

Her feminism was born from this idea and she was deeply involved in the Feminist Art Movement of the 1970s. One of her greatest contributions to the movement was in education. Starting in 1971, she taught a series of professionalization seminars to women artists entitled "Joan of Art.” I came into this world in 1973 and reaped the benefits of her activism and feminism. Being a woman, as she said, should never be a handicap. “You must only let them judge you on your skills and who you are as person and not what they think you represent as a gender!”

“Give as good as you get,” she would often say.

When I made plans to move away from Los Angeles, my grandfather had just passed away and June had been recently diagnosed with cancer. I struggled with the decision to leave. We got together for our monthly brunch date - a date in which we typically discussed art, writing and politics.

At a young age, rather than buy me toys and presents of the like, she gifted me a library card. We would spend Saturdays at our local June Street library carefully selecting books for me to read. She instilled in me a great love of literature and, more importantly, knowledge.We ate at our favorite diner and spoke in detail about my leaving for the East Coast. “Oh” she said, “if I could I would go with you. I envy your abilities. Your strength. Your courage. Go and live your life, my dear. I will always be here for you. Geography is mere circumstance."

I gathered my belongings to leave while she settled the tab. As I walked out the door she called to me and said "And remember, my dear heart, don't lead a boring life!"

Of late, there has been renewed interest in June Wayne and the June Wayne Collection. As I speak to people and art collectors about her work, her art, and her legacy, I can feel her voice in me unlocking the doors with the keys that she gave me over many years.Before her eyes closed for the last time, as we stood holding her hands, my mother with one hand and me with other, she looked at us and said, "This must be done precisely. It must be done just right. And make sure it's beautiful!"

And it was. After all, she was a trailblazer. She was an artist! 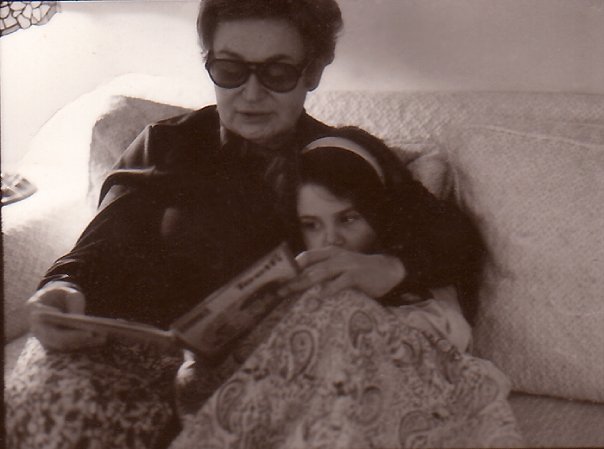