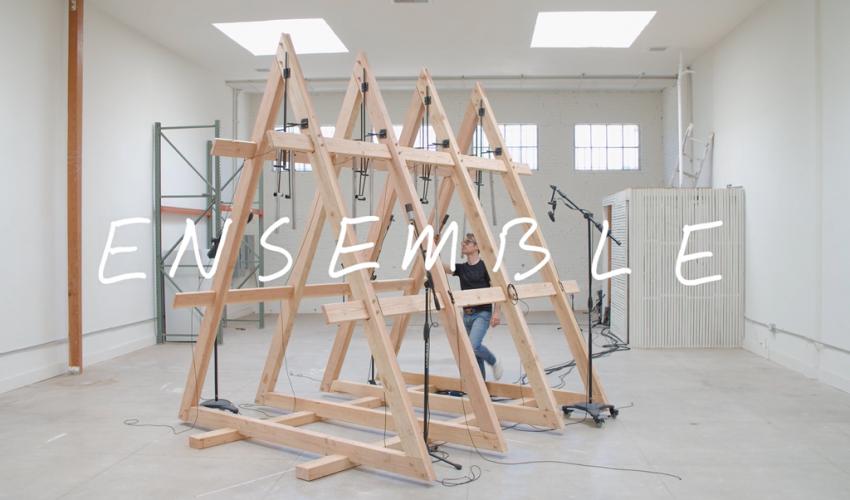 Enjoy a public performance by artists Chris Kallmyer and Andrew Tholl in the Ensemble exhibition. Watch as the artists collectively create music on a handmade carillon.

Chris Kallmyer is a Los Angeles-based artist whose work focuses on sound and space. His unconventional musical works use everyday objects and other senses, such as taste and touch, to engage the observer in questions about the physical environment and our presence within it. Kallmyer's work has garnered commissions from the San Francisco Museum of Modern Art, San Francisco Symphony, Los Angeles County Museum of Art, Walker Art Center, Hammer Museum, Pulitzer Arts Foundation, The Getty Center, Berkeley Art Museum, Museum of Contemporary Art Denver, The Biennial of the Americas, Chicago Cultural Center, Indianapolis Museum of Art, and the City of Los Angeles.

Dr. Andrew Tholl is a Los Angeles based composer, violinist, drummer, and improviser. Hailed by the Los Angeles Times as "vigorously virtuosic," his performances and compositions have been heard throughout the United States and Europe. As a composer, Tholl's interest lies in the exploration of the passage of time, the physicality of making music, noise, nostalgia, memory, and the synthesis of diverse musical styles. He has been commissioned by ensembles such as wild Up, Formalist Quartet, Gnarwhallaby, the New Century Players, and The Isaura String Quartet; his works have been heard at Walt Disney Concert Hall, Los Angeles, Roulette, New York, National Sawdust, New York, Oberlin College, Princeton University, the Hammer Museum, and more.