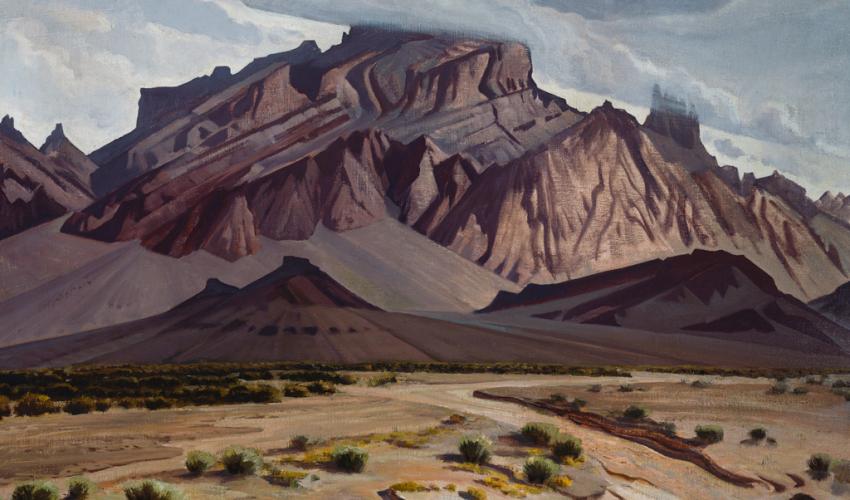 Ray Strong: Beyond Santa Barbara highlights a selection of works by esteemed artist Ray Strong (1905 – 2006) from the collection of the Santa Barbara Museum of Art (SBMA). This intimate presentation of six paintings and drawings features landscapes and cityscapes produced outside of the Santa Barbara area created during a 45-year period, offering a view of Strong’s travels and his lifelong interest in depicting the environment around him.

Preferring to work en plein air throughout his career, Strong was dedicated to rendering the landscape in a representational manner. Strong was born in Corvallis, Oregon, and in the 1920s enrolled in the California School of Fine Arts in San Francisco (now San Francisco Art Institute). He left the program to attend The Art Students League of New York, where he also studied with Frank Vincent DuMond. Upon returning to San Francisco in the 1930s, Strong went on to revive a California version of The Art Students League with Maynard Dixon, George Post, and Frank van Sloan. During the Depression, Strong produced easel paintings and murals for the Public Works of Art Project. Moving to Santa Barbara in 1960, he was commissioned to paint background settings for the dioramas in the Bird Hall at the Santa Barbara Museum of Natural History. In 1986, Strong co-founded The OAK Group in Santa Barbara, a collective of artists dedicated to painting and preserving the natural landscape.

Highlights of Ray Strong: Beyond Santa Barbara include the commanding landscape Requiem for Maynard Dixon (1946), which was painted near Quartzite, Arizona, in the year that Strong’s mentor Maynard Dixon died. The painting Twilight, Mt. Hood (Near Cherryville, Oregon) (1927), painted during one of the artist’s visits to Oregon. Lower East Side, New York City, Rainy Day Under the El (1926 - 27) reflects the artist’s studies at the Art Students League in New York. The exhibition also includes two drawings — Field Near Assisi (1971) and Van Gogh Bridge, Amsterdam (1971) — which provide examples of Strong’s work in a medium other than painting. Staged within the context of Santa Barbara, this presentation allows visitors to consider the geographical breadth of the artist’s work, offering a captivating window into Strong’s artistic legacy.